When I was in the seventh grade, I was sitting in my science class listening to the lecture and looking at the slides of cells. We had just finished studying about the universe, and I noticed that the cells were made similar to the shape of the universe with the nucleus in the place of the sun and the other parts of the cell were like the planets. This stuck with me for a long time. I thought that since the cells made up a larger being couldn’t the universe be  cells making up an even larger being that we had some cognizance  of and that is what many name God or a higher power?

This summer, my granddaughters and I were talking about their theories on life, and I told them mine since they were very similar. It is a bit ironic that almost six mo 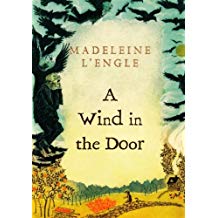 nths later, I pick up Madeleine L’Engle’s A Wind in the Door. This book is all about how the mitochondria in the cells make up a human which is their universe, and that there are many different kinds of universes as well as sizes and shapes. I feel as if L’Engle has put my theory in a much simpler way of understanding.

There are many thoughts out in the world that get picked up by different people. If one doesn’t do something with the thought someone else will.  This book is a great reminder for me of that theory. My dad used to come up with ideas for tools and with a few months, he would see them in a magazine he subscribed to. This book came out before I had the idea, but it could be that there is more to do with it. I had an idea for a book but didn’t pursue it, and a few years later, another woman published a book with a similar idea. To me these are examples of what L’Engle is trying to show in her book. She shows through her characters that people, things, ideas are communicated between places without moving or speaking. These ideas are the ones waiting for someone to do something.

This is a book I’ll be sharing with my granddaughters because of the theories we had talked about and because it illustrates my ideas so well.