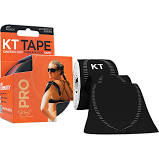 upon this tape when I was at the local sports store shopping for hiking shoes.  As I sat trying on the shoes, I kicked up a conversation with the salesman who was assisting me.  I asked about backpacks and told him that I had a bad back and would need to have some expert sizing before I would buy the pack.  I told him about the different trips we took last year.  He asked me if I had hiked to Marlette Lake yet.  I told him that that one kicked my but because of the incline and explained all of the physical therapy and pain medicine that I had tried to relieve the knots that came as a result.  That is when he asked me if I had tried KT Tape.  I had never heard of it.  He told me that it was the tape that physical therapists used.  I had seen that with some of my students and had wondered its purpose.  He told me that it was for injuries and other muscle or nerve issues, but that everyone really liked it.  I bought it.

The tape is precut and has a backing to keep it from sticking to itself. It is also perforated part way down the middle so it can be split and used in a y pattern.  There are several good tutorials on YouTube so that the user can be sure to place the tape properly.

After some time, I started to question my purchase.  But I finally decided to use the tape one day when I went out for a 4 mile hike.  I watched the YouTube instructional video for the pain that I have and followed the steps.  The tape went on my hip in a star pattern.  This is for IT Band pain.  It goes on clean skin and stays for a week even through baths and showers.  I set out on my hike and quickly realized that I wasn’t getting sore at the mile point that I usually did.  The tape felt tingly or tickly, but it seemed to work.  I was able to keep my pace and the stretch afterwards was nice.  The next day, the pain that I expected wasn’t there.  The pain never came.

I tried this for the next couple of hikes with great results.  I am now going to use it for both hips and for both shoulders to see what it does for me.  I am hoping that I can tackle my Mt Hood to the Bridge of the Gods hike without too much pain.  These are hot spots for me on a regular basis, but the pack and elevation change can trigger the pain as well.  I am hopeful and am going to try it on the hikes I will be taking leading up to the big hike.

Right now I am sold on the tape and will be using it in the foreseeable future. It is the only thing I have found so far that relieves the pain for several days in a row and keeps the pain from increasing with exercise.

*I have not been paid for this endorsement nor am I affiliated with the company.