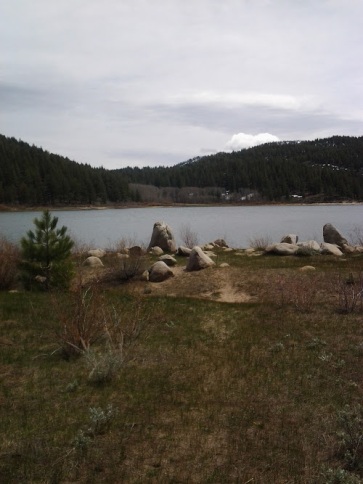 e went to Spooner Lake, I had only been walking 2 miles a day and three miles in the 5Ks, so it was a good place to start hiking.  A 2.1 mile circle was nice.  We could feel the workout but weren’t hurting from it.

The trail followed the lake shore at a slight distance.  The path was fairly smooth and quite vivid.  It was early April so the air was brisk but not so cold my lungs hurt.

The grass was already greening and the trees had started to leaf.  They didn’t know it was going to freeze again let alone snow into June.  For a good portion of the hike, we were in the sunlight – it felt nice.  The trees were common to the area – white pines, quaking aspen, and cotton woods.  On the aspen we looked for the Basque sheepherders’ markings but only saw modern graffiti.  The aspen were among the largest I have seen, yet they didn’t bear the Basque mark.  They must have been younger than that and well-watered to be so big. 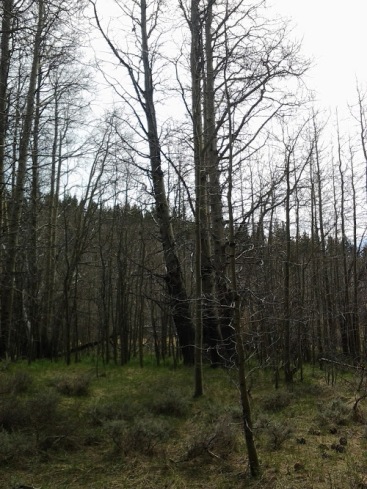 As we got to the south side of the lake we came to big rocks to climb.  I could get up but struggled getting down – part of the stiffening I get when I climb down from things. (I have to work on that.) Also on the south end, there was an expanse of snow to cross.  A trench stomped through the snow became the path.  But it was narrow and slick.  I found I did better creating my own path.  I know no one else had want 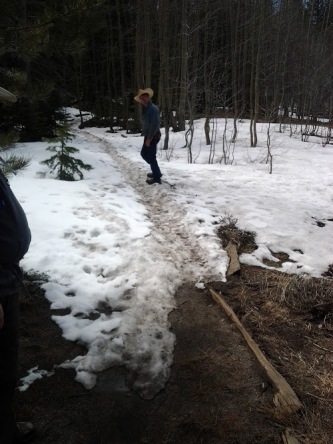 ed to mar the snow any more, but had I not gone out on my own, I would have marred it much more when I fell, and I didn’t feel like falling.

Upon our return to the parking lot, we entered at a different location.  There was a nice picnic place with a warning sigh.  It said, “Bears in the Area.”  I knew there were bears up in these mountains, but I found it nerve wracking to find the sign.  Had I seen it before the hike, would I have still gone? Probably, but I would have been paranoid looking about for the bear to scare us.  It was a great starter hike, and I will be back to incorporate it into another.